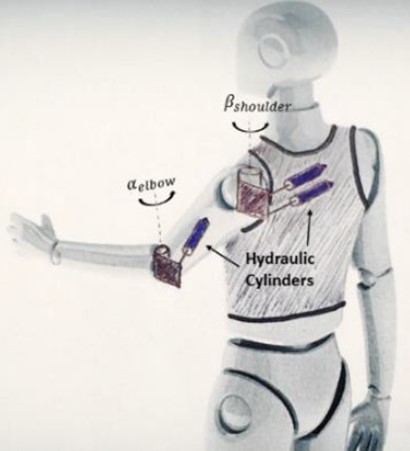 Hydraulic cylinders are the most commonly used actuators for small, passive hydraulic systems such as passive human body controlled devices. One example is rehabilitation robots where the transmission extracts power from functioning muscle groups and delivers it to assist or guide stroke-affected muscle groups. In this system friction and leakage of the actuator are crucial, and typically rolling diaphragm cylinders perform best. However, rolling diaphragms currently available are limited to a stroke length being no greater than the bore of the cylinder. This restriction on the stroke length affects the work per cycle of the system and as a consequence decreases efficiency of the actuators.

To address this issue researchers at the University of Minnesota have developed a long-stroke rolling diaphragm (LSRD) cylinder that can be manufactured with any stroke length ( i.e, it is not limited to the standard the 1:1 stroke-to-bore ratio) while also displaying low friction and no leakage. Several tests have been conducted to evaluate the dynamic performance of this device including friction, stiffness, tracking impulse response, and step response. Results showed this new LSRD cylinder could operate at loads up to 700 kPa.In addition, a fatigue test of 1000 cycles showed a burst pressure of 350 psi could be reached. Thus, this novel device could enable actuators in small-scale hydraulic devices to achieve high force and volume efficiencies.

TRL: 3-4
A method of manufacturing and a working prototype of a long-stroke rolling diaphragm (LSRD) cylinder have been developed. This newly developed rolling diaphragm cylinder has been incorporated into the upper-limb rehabilitation robot (eMobt) as an actuator- a project funded by the National Institutes of Health (NRI).