A panel of six definitive biomarkers that can be isolated from a canine blood sample for the detection of minimal residual disease and monitoring remission in dogs treated for osteosarcoma. 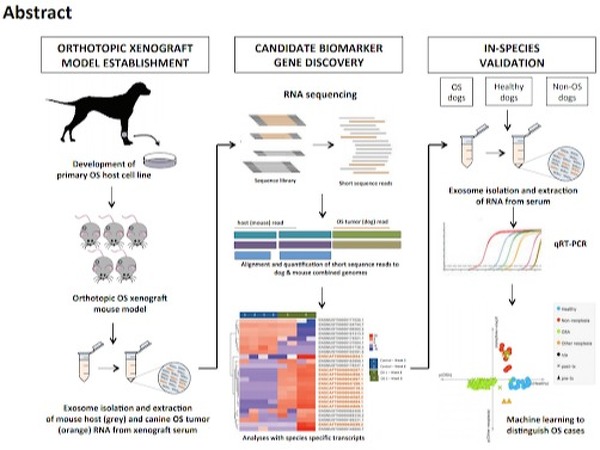 Osteosarcoma is the most common primary bone tumor found in dogs, particularly in large breeds where occurrence can be as high as 20%. Although effective treatment is available if the cancer is caught early (amputation, irradiation, chemotherapy) there are no safe, early diagnostic tests. Furthermore, osteosarcomas are highly aggressive cancer and micrometastasis occurs in up to 90% of dogs, emphasizing the importance of close monitoring following treatment. Unfortunately, the current methods to assess dogs for relapse are multiple radiographs or CT scans every three to six months respectively. There is a clear need for a simple, low risk method to detect canine osteosarcoma for use in diagnostics as well as after diagnosis and/or remission in order to inform treatment decisions in a timely manner.

Dr. Jaime Modiano’s lab at the University of Minnesota used a method they previously developed (UMN Case No. 20170056) to identify a differential biomarker signature for osteosarcoma in dogs. The biomarker consists of a panel of exactly six, cell free nucleic-acid biomarkers that can be collected from a simple, minimally invasive blood sample. The biomarkers were identified using samples collected from dogs with osteosarcoma as compared to dogs with no evidence of disease, other tumors or other diseases in order to create a test that was sensitive and specific for osteosarcoma. Validated for the detection of residual osteosarcoma following treatment, this biomarker is currently also being developed and tested for use as an early, minimally invasive diagnostic.

TRL: 3-4
Biomarker panel developed and validated using 62 dogs, including dogs with osteosarcoma, other tumors, other conditions, and dogs with no evidence of disease.